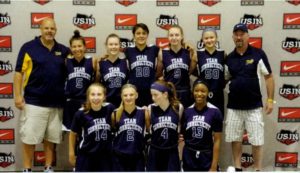 Jack Bethke is the co-founder of Team Connecticut, which, when it started in 1994, was just the second girls AAU program in the state. Since then, he’s risen to become the Governor of the Connecticut AAU and the Girls Basketball Chair.

While his brother, Steve Bethke, focuses on coaching, Jack handles everything behind the scenes — scheduling, contracts, insurance, finances. Jack recently took a few minutes to chat with The Real AAU Basketball magazine.

What’s the philosophy at Team Connecticut?
Our motto is we’ll turn your daughter into the best player she can be. I’ll get a parent calling me up saying, “So and so said they’ll turn her into a Division I basketball player.” That’s not good advice. Not everyone is going to play in college, much less Division I, but what are the things they need to do to put themselves in the best situation?

If there is a girl 6-5, she’s probably going to get a scholarship whether or not she can walk and chew gum over a 5-5 player that may be terrific. That’s unfortunately just the way it is, but you can bring in all the other (off-the-court) particulars that possibly could get you to a play at a higher level. If you do that, coaches will take a chance on you. If this is a D student, the parents are nasty and the kid looks like she has a bad attitude by kicking the bench when she walks off the court, they’re not going to bother.

What does success look like?
We had a girl a couple of a years ago that got a full ride to Franklin Pierce that she had no business getting. I mean, she was a D-3 ballplayer, but the coaches liked her. She worked her ass off. I remember the first time she came to practice, she said she was going to play UConn. We never laughed at her, but we knew she was never going to play at UConn. She kept that dream. In the end, she got a scholarship to Franklin Pierce, which was half academic her first year. The coaches fell in love with her. I don’t think she scored more than a couple hundred points in her whole career, but she’s playing in Europe now and she’s enjoying it and enjoying basketball.

The coach at Franklin Pearce, who was very good, said “Athletically, I don’t know, but she’s so good scholastically,
I’ll give her half an academic scholarship to see how she does.” He called my brother back about a month later and told him they gave her three-and-a-half years athletic. “That’s a success story. Some people don’t think that, but we do because she fulfilled a dream by doing what she wants to.

Are parents more difficult now than they were 25 years ago?
People think that everything is instantaneous today and a lot of things are at your fingertips with the internet, but I think the parents are not as well schooled. . . . It’s a complicated question because I think we have a lot more snake oil salesmen instead of people saying, ‘This is what you really have to do (to get better).’ I think that parents don’t get the full picture a lot of times. A lot of coaches find parents frustrating.

What is your biggest pet peeve?
Some think, “My daughter is a good player because she scores 20 points in a rec league, so we don ‘t have to bother with fundamentals.” That’s one thing that really irks me today. They just want to roll the ball out there and have fun.

What advice do you have for someone that wants to start a program?
You have to decide what your program is going to be about. Is it going to be about being an all-star team with the 10 best players that I can find? Or is it going to be about a program that can develop players? You go from there.
“The other thing that I find is that people think that it’s very easy. The nice thing about our program is that my brother does the coaching — the Xs and Os — I do all of the scheduling of practices, making sure certificates and insurance are place. I get people who call me up and say, “Jack, we started a program but they’re asking for a certificate of insurance and I don’t know what that is.” You need to sit down before you start a club and realize that it’s going to take you a little bit to get everything in order. You just don’t walk into a school and say, “Hey, I’m going to practice here.” You have to get all that all done in the beginning.
(credit: The Real AAU Basketball – Winter 2019)

3/21 -Team Connecticut travel season will begin on Tuesday March 22, at 6pm at the North Haven High School with an open house clinic. We are inviting all interested girls grades 5-11 to attend. Information about the upcoming season will be given at this time. We will continue on Thursday night also with our second session. If you have not already responded, please let us know if you will be attending. jackbethke@yahoo.com

Talking Shop
Getting Players Out Of Their Comfort Zone